I am a huge Neil Gaiman fan. He was the author that first introduced me to urban fantasy, my favorite genre, and subsequently I found a name for the sort of fiction I wrote, and a clan of followers. This was all before Stardust was released on DVD and everyone and their mothers were reading Sandman. Not to say publicity isn’t good, but now he’s become kind of a bad writer (I hated Fragile Things, it was so boring. Not at all similar to Smoke and Mirrors). I think it’s really easy to fall back on popularity and put out whatever you can when you’re a megasuperstar. He really is the Thom Yorke of non-literary fiction these days.

That said, I’m doing Neverwhere today, which I’m sure most of you know, and for those who don’t, it follows this guy who stumbles across a strange girl named Door, who has magical powers and can open any door she comes across. She takes him to London Below, which is basically London, but underground and spooky. She has to find out who killed her family. They meet the Marquis of Carabas (who is my favorite character), the token character that employs dry wit to give a humorous edge to some scenes. It’s a great, great book. Do read it if you haven’t.

Neverwhere has been released so many times in the past fifteen or so years that the number of copies available (or not available) is pretty large. I guess he didn’t really boom in popularity until five or so years ago, so maybe that’s why. 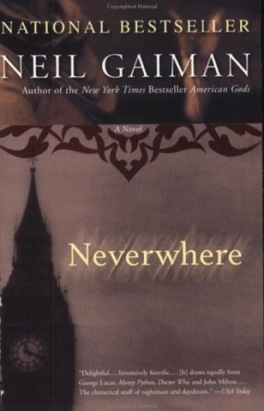 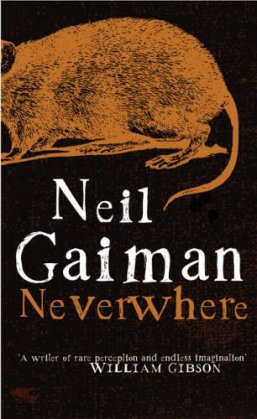 This one is a comic book, but nonetheless has furthered the Neverwhere franchise. 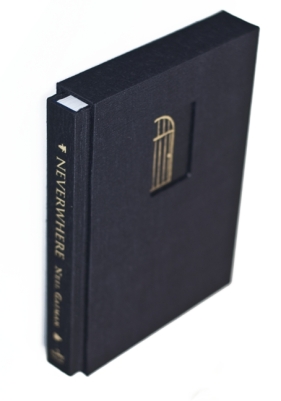 The latter edition was a special release, only sold for 2 days, and cost $200. All the copies were signed and were printed 7×10. It was the “author’s preferred” text, which I assume means the UK version (the US publisher cut out 2000 words). Kind of like a Director’s cut, I suppose (see post on film and publishing!)

And I’m not counting the foreign editions, of which many exist. I found a photo of the French version:

You can look at all the foreign additions here.

There’s also a DVD release and several audio CDs, though I won’t get into that here. I’ve never seen the Neverwhere miniseries, so any opinion I could give you would be highly uneducated.

Does anyone else love this book as much as I do?

This isn’t exactly about cover art, though some of Kay Nielsen’s drawings have graced the covers of picture books and storybook anthologies. Nielsen is an acclaimed illustrator from the earlier part of the 20th century.

I’ve had a copy of East of the Sun and West of the Moon, illustrated by Nielsen, since childhood. I was intrigued by his style and wanted to see more of his work after I revisited the book this week. This led to an overly long time spent researching folktale illustrations (hey, I guess that would be useful for publishing…?), especially Norwegian ones.

I’m half Norwegian, and have found myself very interested in my roots lately. Nielsen is Danish, but he has done plenty of work on Norwegian folktales. He died in poverty–a sad ending for someone so talented. I find it discouraging that so many creative visionaries find themselves in less than desirable circumstances at their deaths (with notable exceptions, of course, such as Walt Disney).

What’s even more discouraging is that this book now sells for near $40,000, and the author sees none of the profits (well, that would be hard since he’s been dead for years, but you know what I mean).

Here’s a nice biography of the illustrator. And here’s a link to the online version of the book, posted by Project Gutenberg . Gotta love them.

Some illustrations from East of the Sun and West of the Moon, by Peter Christen Asbjørnsen and Jørgen Engebretsen Moe, published 1914 by Hodder & Stoughton:

And an illustration not from the collection:

Now, finally, the actual book. The original edition from 1914:

Folio released a new edition of the book in 2000.

Apparently it’s worth around $200…I guess we’ll be keeping that one. Maybe in the year 2050 we’ll be able to sell the book as an artifact.

Thanks for reading! Cheers!

Right now, I’m working on a feature-length screenplay adaptation of the fable Three Princesses in the Blue Mountain, one of my favorite childhood stories. I highly recommend you follow the link and read it, as it’s one of those fables you just can’t help but like. I was hopeful to find the story in another Norwegian anthology, but I had trouble locating a decent one. The search eventually led me to one of the best fairytale collections of all time (I’m sure you all know what I’m talking about): The Blue Fairy Book, by Andrew Lang.

Andrew Lang has written a ton of fairy books, all different colors (there’s even an olive fairy book!), all with collected short fables from around the world. I wish I had this when I was little (we had a Norwegian collection that only contained four longer fairy tales and the Hans Christian Anderson collection)!

I thought that since I spend roughly five hours a day pouring over a fairytale, it would be nice to do a quick post about the beautiful cover art that has adorned Andrew Lang’s Blue Fairy Book over the decades. 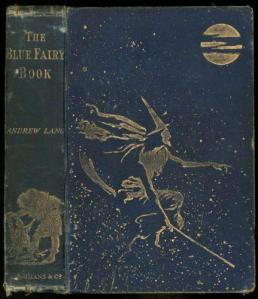 This is the original 1889 edition, published by Longmans, Green, and Co of London. Henry Justice Ford did the illustrations (one from East of the Sun, West of the Moon, another short Norwegian fairytale, is at the bottom of the post).

This is followed by 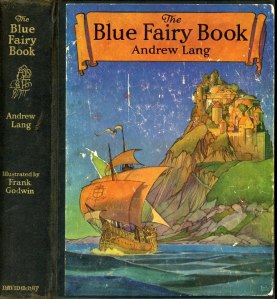 the David Mckay edition of 1921. Slightly less whimsical and a bit more cartoonish, but still cute. I prefer the original, but who doesn’t? Usually the first editions are always the most tasteful.

Then we have the Dover Classics edition from 1965. This one is pretty blah. It’s boring and the color blue they chose is a bit too pale.

Finally, there’s the 2003 edition from Folio of London. I really like this one. It is bound in the style of the 1890s and tries to imitate the feeling of the original illustrations. I prefer this color blue (a little less cornflower) than that of the Dover version. I also really like the details on the spine.

Not to mention the interior! The illustrations are gorgeous.

I love fairytales. Now it’s off to edit my own (which, by the way, takes place in Nazi-era Norway and involves soldiers and wolves. It promises to be highly entertaining). Cheers!

I find this marketing campaign despicable, but incredibly effective:

HarperCollins Teen released new editions of three old classics way back in 2009, each of which was mentioned in Twilight as one of Bella’s favorite books (if you’ve missed out on the Twilight phenomenon, you must live under a rock, so I’ll let you dust the dirt off your laptop and find out about it elsewhere). I don’t know about you, but I was rather saddened to see three solid classics adorned with blatant Twilight-knock-off covers. 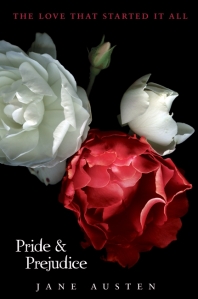 It’s not that they’re badly done, because really, they’re not. If you think about it from the point of view of a publicity agent, this is actually a really smart move. They’re basically marketing these three books as a continuation of the Twilight series–the blurb on the front of P&P says, “The love that started it all,” which to me implies that this is supposed to be a prelude to Bella/Edward’s relationship, and that these two novels have common ground. Of course, anyone who has read P&P knows that Darcy and Edward are nothing alike and that Bella and Elizabeth aren’t either, but the average teen probably hasn’t read it.

I’m sure Harper Collins Teen claims that these covers will induce more children to read, but really, if it takes a marketing scheme based on one of the most overrated books in existence (not to mention one of the most flawed and poorly written), then I don’t think there’s much hope for the masses of the coming generations. 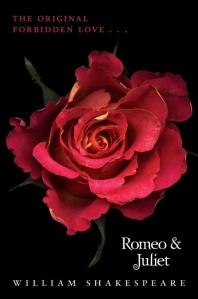 Of course, I hope that’s not true. I like to think that reading will continue to be a staple of everyday life for the next few centuries, and that ideas will continue to spread through the written word. Popular culture is extinguishing my hope for this (by the way, have you looked at children’s handwriting these days? Thanks to computers, they have the worst penmanship I’ve ever seen) but I do see the point behind this campaign.

Well Harper Collins, I will commend you. I hope that entices you to read over my application to be your editorial assistant, despite the fact I just disparaged your company.

Cheers and have a good Saturday!